WHO invented the first computer? And when? 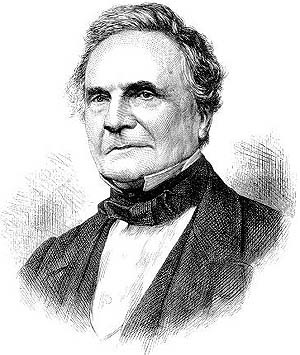 The answer will surprise you: it was Charles Babbage, in the year 1832.
Babbage, who was born in London in 1791, was a great mathematical genius. He was a natural inventor, and invented all sorts of new products.
When he finished school, he went to study mathematics at Cambridge University. Later, he got a job teaching at the university ; and while Professor of Mathematics in this illustrious university, he designed his “first difference engine”. This was, basically, a hand-operated mechanical calculator.
He took nine years to build a part of the machine. This machine, which is in the London Science Museum, can make complex mathematical calculations. It is a basic mechanical computer.
Babbage dreamed however of more complicated machines. In fact, he did not only dream; he began to design them. The result was a series of “analytical engines” which were in fact powerful computers!
His designs contained processors (he called them “mills”), control units, a memory (he called it a store), and an input/output system. These are the four essential parts of a modern mathematical computer!
Alas, Babbage was born 100 years too soon! His “second difference engine” could not use electricity, since this had not yet become a usable source of power; so Babbage had to make do with mechanical systems. For this reason, the machine was big and very complicated, and very expensive. Though Babbage produced complete plans for the machine, he could not build it. It was too sophisticated for its age!

It was not until almost 160 years later that Babbage’s “second difference engine” was finally manufactured. The first working version of this machine was built by the Science Museum in London, for the Babbage bicentenary in 1991. It can now be seen at the  Museum; a second machine was then built for an American high-tech millionnaire, who put it in the Computer History Museum, in Mountain View, California.
Babbage’s analytical engines would have used “programmes” like those used in the textile industry to make complicated patterns; but they were never built. This brilliant mathematician really was too far ahead of his time !

Can you explain, in English, the following words and expressions?