Her name was Elise Toussaint. And as I looked up at her face, I couldn’t help but feel regret. This emotion isn’t the kind that settles after long thought; it slams you in the gut and knocks the wind out of you. 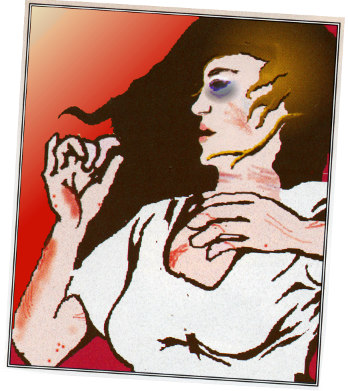 I was called in by the warden of the Federal Prison for Women, who wanted me to attest to the fact that there were no more bruises or cuts on the body than there had been the day before.

You see, I was the tracker that finally caught up with this little lady after she escaped and lead the marshals on a chase of 3 days and a hundred miles. Choppers, dogs, and men were called in from all over the country to apprehend this “desperado”, this “prostitute”, this convicted “drug lord” from a nearby state. Little did I know then that she was running for her life.
“What is it, Coke?”
The impatient voice behind me wanted to hurry things along. He wanted to get this lifeless piece of trouble out of his barracks, avoid the risk of scandal. Well, as a tracker, I don’t like to be rushed; and when my name, Coke Bucknil, goes on a piece of paper that is to be taken as gospel, naturally, I take my time.
“How’d she die?”
“Broken neck. Can’t you see? She hung herself.”
“The correct term is hanged. Her toes are touching the floor.”
“So? She’s been there since 3 a.m.”
“Where’d she get all that cloth to make the rope?”
“She used the bandages.”

Yes, I remembered. In her desperation to get away, she lead me through thick bramble,  thorns, and muddy fields. She was suffering from exposure, scratches, bruises, and blisters from the bites of fire ants. How they must have hurt, but she never whimpered, not even when the officers pushed her into the mud to cuff her. She’d needed a lot of bandages.

That image of a survivor rankled in me now, as I inspected the body of one who apparently gave up in suicide.
“These red marks across her face, they weren’t there yesterday, Warden.”
“Oh yeah. I guess she made them when she slipped the noose over her head…. Come on, Coke. You’ve been long enough.”
“Well, I’ll have to mention those in my report.”
“Get this straight, Coke, if you even insinuate that this is anything but a suicide, I’ll see to it that you never work in this town OR in this state again.”
“I didn’t insinuate anything. D’you know something I don’t know, Warden?”
I enjoyed irritating him, but I didn’t want to make him mad. ‘This state’ was a large territory not to ever work in again.

As for the town, it has more than 200,000 people but only one newspaper, one whose reporters write what they’re told to write, one that has an agreement with the college to suppress reports of gang activity so that parents will not send their little darlings somewhere else. And as I stood looking up at that lifeless face, a face that had been beautiful at one time, this and other cover-ups blitzed my mind. I turned away from the body, and left the building.

One thing about trackers: like they know how to read the signs in the bush, they can read people. The warden meant what he said, and as I walked to my car thinking about Elise, I wondered if that mattered to me. If I hadn’t seen her twice, I would have written anything he told me, even rhyming poetry. But the signs made me pause. The expression on her white face was not one of peaceful suicide. It was fear, pure and vivid fear. I’d seen that kind of fear before.

Another sign: How could a woman as slight as she was jump one foot off a cot and break her neck? The act would only choke her. And… the marks on her face were not from the cloth noose. They were made by large hands that pressed the life out of her and broke her neck before they tightened the noose around her throat.

“She was murdered.” I said out loud, and drove out the gate. If I had a decent bone in my body, I’d go to the nearest Police Station and tell them my suspicions. But I had to think this through. My life, as mediocre as it was, still meant something to me. If I wasn’t careful, I’d end up like her, because the power of two states was at work here.
She’d been convicted as a drug dealer and prostitute. That was the rumor, anyway. But I don’t pay much attention to rumors.

I had my own theory about what really happened. When the idiot governor of this nearby state got tired of his mistress, he planted drugs on her, labeled her a prostitute, got her convicted, and sent her here; all because she knew too much of his organized crime activities. He had to get her out of his way so that when she was killed, he couldn’t be blamed.

With that in mind, I finally decided what I was going to do about the injustice done to Elise, and professionalism took over. From my small apartment, I did my tracking over the computer until 2:30 a.m. By that time, I had a plan of action that would take me over the next week.

By 3 a.m. I had the Warden’s mansion under surveillance from a respectable distance. I was looking for a particular activity and found it. I had a tracker’s hunch I might find the governor’s bodyguard from the nearby state, and I was right. In the early hours, the man emerged from the Warden’s mansion. There was no need to follow him; I knew where he was going.

By 4 a.m., I was home again. Settling with the warden was easy. I would use my “special-occasion” stationery. Handling it with plastic gloves, I wrote my report the way he wanted me to, activated the chemical, and slipped it in a protective plastic. I addressed the envelope, making sure it was FOR THE WARDEN’S EYES ONLY.

A few hours later, I took a plane to a coastal resort where the governor had a residence. During my week there, there was quite a commotion, when coastguards brought in the bodies of the governor and his bodyguard who had drowned, quite inexplicably, during an afternoon fishing trip. How fitting that they should be together when it happened, I thought.

Meanwhile, back home, the Warden also died suddenly, apparently of natural causes. Since he was easily replaced, I still had a job.
One thing about trackers: When they feel that gut-wrenching regret, sometimes they do things for free. I did… for Elise.

!!! Note the difference between hung and hanged. Hung means suspended (anything), hanged means died from hanging. !!!

An interview: provide the questions : FOR ELISE Several months after the events in this story, an investigative journalist from New York came to interview Coke Bucknil about the story of Elise Toussaint. Here are Coke Bucknil’s answers to his questions; what were the questions?